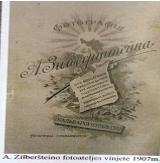 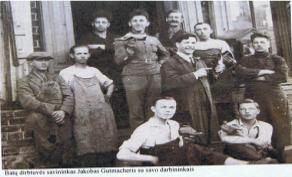 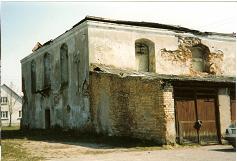 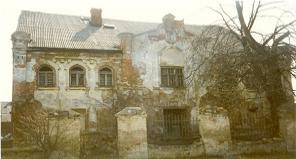 First of all let me thank Algis and Antanas for organizing my stay in Lithuania in 2009. Thanks to good folks at the Kalvarija Municipality who ensured that the weeds in the cemetery were cut.

An especial thanks to the good folks at the Kalvarija Gymnasium whose help was invaluable.
The process: 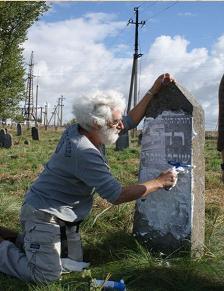 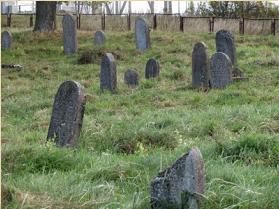 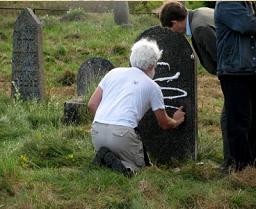 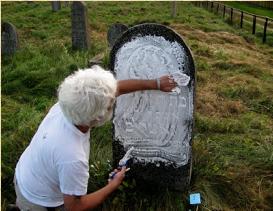 Calvary Jewish surnames shows the use of shaving foam

On Friday, near the border with Poland at Calvary in the old Jewish cemetery in the town of Kalvarija, oblivion has been resurrected by history, which is little remembered. From Israel comes  Jewish community life in the Sūduva area, researcher Ralph Salinger , with the help middle-school pupils, deciphered the names of Jews buried here.

In the Hebrew language it is possible to read the  monuments remaining records shaving with the help of shaving foam. This method of detection on the Internet, the guest from Israel soon convinced of its effectiveness - soiled foam monument, followed by cleaning rod, the remaining foam grooves make it easy to read the monuments records.

"You can imagine what the eyes of supermarket sellers looked at me" - kvatojosi luxuriant beard growing Jew.

The Guest Calvary Cemetery historian of Jewish history in this city researcher Alvydas Tottori only gasp - one after another from oblivion had the names of which he knows to have their own archives, they reminded the trader in the city, artisans have been in the Calvary shops, hairdressing salons, and the other institutions.

One and a half days with the helpers, Ralph Salinger . in the cemetery on Friday afternoon finally stretched back - captured levels of transcription and eighty monuments records, so once there lived a Jewish names are known.

Calvary was once home to a large Jewish community - before the First World War, almost 80 percent of the population consisted of the following nationalities, almost half of the total population were Jews, and before the Second World War. . Now their not one, but about once a flourishing community, there is no evidence of such a remnant of two synagogues in Lithuania and the Talmud school building complex, a few years ago a repair, but after the German "Zeit Fund for money,

Material collected on Calvary Jews will not disappear - next week he returned to Israel, Mr Salinger will put all the names placed in a special web page created three years ago, when then the sum of the collected material on the Jews living in Vilkaviškis once. . Even before this trip about fifty people, whose ancestors come from Calvary, it was found a Mr Salinger and me, or will find him passing Calvary cemeteries.

. "The difference between Vilkaviskio Calvary and Jewish cemeteries - obvious. Vilkaviškyje . Vilkaviškis Jews lived in many rich, beautiful monuments, granite or marble, and there is no such Calvary, in addition, there is more decorative elements. Vilkaviškis two years I have been able to decipher some 180 monuments, records, correspondence, and now with more than a hundred people from all over the world, with roots in the city, "- said the representative from Israel.

Calvary Cemetery detected only one expensive granite monument, lying near the entrance to them. „Kaplanas", - perskaitė R.Salingeris,. "Kaplan" - read by Mr spreader, while A. Tottori immediately said that it was a fruit shop in the town center had the dealer.

. "I think it was a cemetery and more monuments of marble or granite, but they all probably have been stolen, only This, for Kaplan, because of its size and weight have remained in the cemetery" - considered a historian.

For those who wonder why he does it and what it should be, Mr Salinger said that someone had to do it, and Jews pre-war Lithuania has played a significant role, they have lived here for hundreds of years, and it can not be forgotten.. The Mr. Salinger and met with Vilkaviskio, Pilviskiu, Calvary Gymnasium pupils who confessed that the once near their grandparents living in the Jews know nothing. 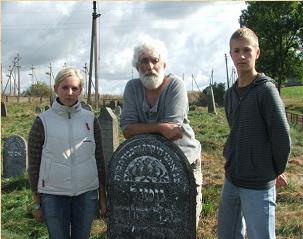 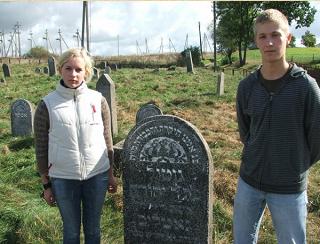 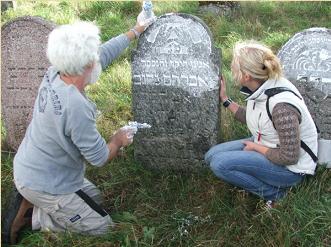 Kasper and Svetlana the two pupils from the Kalvarija Gymnasium High School that helped me on the project. Thanks also to Yossi Ankorion who took all of the pictures of the project on our first day of work.
The cemetery before cleaning
Spraying on the foam
Spreading the foam
Removing the excess foam
Lrytas is the Lithuanian national newspaer
testing 1