The French Period 1805 -1813
After Napoleon defeated Prussia and according to the Tilzit agreement of July 1807, Polish territories occupied by Prussia were transferred to what became known as the "The Great Dukedom of Warsaw", which was established at that time. The king of Sachsonia, Friedrich-August, was appointed duke, and the Napoleonic code now became the constitution of the dukedom, according to which everybody was equal before the law, except for the Jews who were not granted any civil rights.

During the years 1807-1813, Vilkovishk belonged to the "Great Dukedom of Warsaw" and was part of the Bialystok district. The Napoleonic Codex was then introduced in this region, remaining in effect even during the Lithuanian period.

In the summer of 1812, Napoleon, with a huge army of about 250,000 soldiers, stayed there for 4 days, causing great damage to the residents of the town and its surroundings. Napoleon told a delegation of Vilkovishk Jews, who had approached him requesting that the army stationed there remove their horses from the synagogues - it being before "Tisha beAv" (ninth of Av) and the Jews wanted to mourn the destruction of the Temple in Jerusalen, - that he had been in Palestine with his army in 1898-99, and that if he managed to conquer that land he would re-establish the Jewish Kingdom. 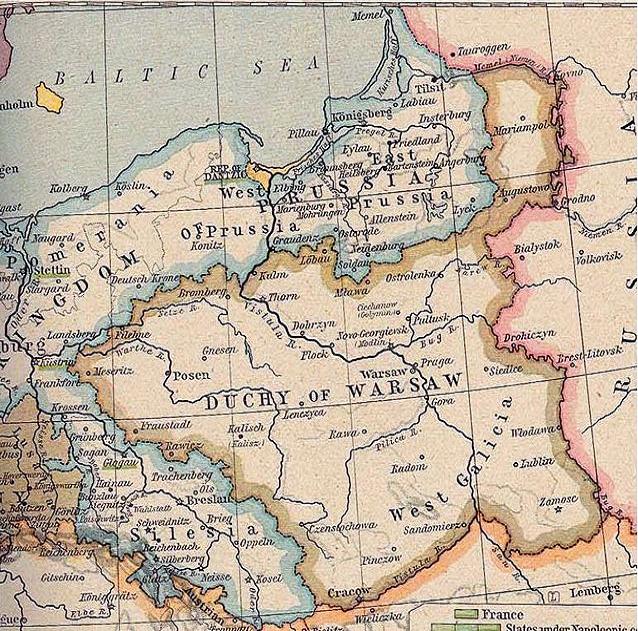 * Vilkaviskis
Formation of the duchy

The area of the duchy had already been liberated by a popular uprising that had escalated from anti-conscription rioting in 1806. One of the first tasks for the new government included providing food to the French army fighting the Russians in East Prussia.

The Duchy of Warsaw was officially created by Napoleon Bonaparte, as part of the Treaty of Tilsit with Prussia. Its creation met the support of both local republicans in partitioned Poland, and the large Polish diaspora in France, who openly supported Napoleon as the only man capable of restoring Polish sovereignty after the Partitions of Poland of late 18th century. Although it was created as a satellite state (and was only a duchy, rather than a kingdom), it was commonly hoped and believed that with time the nation would be able to regain its former status, not to mention its former borders.

The newly (re)created state was formally an independent duchy, allied to France, and in a personal union with the Kingdom of Saxony. King Frederick Augustus I of Saxony was compelled by Napoleon to make his new realm a constitutional monarchy, with a parliament (the Sejm). However, the duchy was never allowed to develop as a truly independent state; Frederick Augustus' rule was subordinated to the requirements of the French raison d'état, who largely treated the state as a source of resources. The most important person in the duchy was in fact the French ambassador[citation needed], based in the duchy's capital, Warsaw. Significantly, the duchy lacked its own diplomatic representation abroad[citation needed].

In 1809, a short war with Austria started. Although the Battle of Raszyn was won, Austrian troops entered Warsaw, but Duchy and French forces then outflanked their enemy and captured Cracow, Lwów and much of the areas annexed by Austria in the Partitions of Poland. The ensuing Treaty of Schönbrunn allowed for a significant expansion of its territory southwards with the regaining of once-Polish and Lithuanian lands.
A small town in Southern Lithuania
Where the Jewish Community no longer exists
Return to Main Vilkaviskis History Page